Today started out cool and cloudy with me riding all over the back roads. This is Jessie James country so as you can guess everything has to do with outlaws.
I was in four states today, Nebraska, Iowa, Missouri, and Kansas. As I was taking a picture of the Kansas sign tragedy struck as some a**hole trucker passed so close to my camera tripod the wind from the truck blew it over breaking the camera. Thankfully it had just taken the picture so all was not lost. This would not have been so bad if he had not been the first vehicle to pass in five minutes and could have moved to the far lane with ease.
Oh well, a few minutes and a credit card at Best Buy takes care of a broken camera. 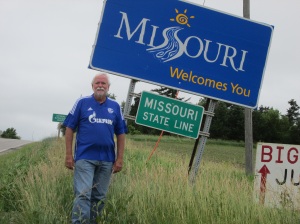 #26 I would have taken a better picture but about three seconds after this was taken the camera fell over and died.